by admin
in Blockchain

The arrival of new technology trends has always introduced new waves of transformation across different industries. When the internet arrived, no one would have ever imagined how the top Silicon Valley enterprises changed business and technology for everyone. Years after the internet business revolution, the world is all set for the web3 revolution, and web3 gaming is one of the initial steps in this long journey.

The concept of web3-based gaming is obviously different from that of conventional gaming platforms. As a matter of fact, the web3-based games offer an innovative perspective for participating in games through decentralized approaches. So, what are web3 games? The following discussion helps you find the answer with a deep dive into the fundamentals of web3 games.

Want to know about the evolution of Web 3.0 through examples? Check out the detailed guide Now on 35+ Web3.0 App Examples

If you try navigating through numbers related to the traditional gaming industry worldwide, then you will find promising ones. The video game industry has millions of customers worldwide and is a multi-billion dollar sector. However, the need for web3 or blockchain games evolved due to the setbacks evident in the conventional gaming industry.

The first problem in the case of traditional gaming refers to the fact that players can purchase assets in the game with fiat currency. However, the assets would hold value only within the game’s ecosystem. As a result, players cannot trade their in-game assets on any other platform beyond the concerned game’s marketplace.

Apart from the limitations on trading in-game assets, players have to notice the implications of control over their assets. Are you the true owner of your in-game assets? Unlike the top web3 games, the game owners or operators have copyrights to the in-game assets. In other words, players who have in-game assets in traditional games basically have a license for interacting with different in-game assets.

If you are wondering about traditional gaming being a top contender to new web3-based gaming models, then you must notify the setbacks of decentralization. You must note that traditional games store all the information related to the game on their own servers. The game administrators take complete control over the usage of the game-related information, thereby imposing the burden of centralization. However, the limitations of centralized servers lead to vulnerabilities and inadequate safeguards for digital assets.

The concept of web3 gaming in crypto evolved primarily to resolve these concerns in the traditional gaming industry. Let us learn more about web3-based gaming and the key traits of the revolutionary gaming model.

Get familiar with the terms related to Web 3.0 with Web 3.0 Flashcards

The obvious aspect in any discussion on “What is Web3 Gaming” would start from the definition of web3-based gaming. You can understand the term as a new method of decentralized gaming. All the activities in the web3 games or gaming ecosystems, as well as ownership of in-game assets and experiences, fall beyond the scope of any central authorities. Players have complete ownership over their assets and experiences in the decentralized web3 game ecosystem. One of the primary highlights of web3 gaming points at the integration of blockchain in the world of gaming. How is it possible, and why is it relevant?

When you take a look at the problems in the traditional gaming industry and the traits of web3 games, you can discover a productive connection. For example, the advantage of decentralization in the top web3 games helps players contribute their opinion on the game’s future. In addition, web3 games offer the innovative benefit of play-to-earn games rather than the pay-to-play model in traditional games. Some of the noticeable highlights in web3 games supporting the play-to-earn functionalities include features for asset trading or tradable game tokens. Axie Infinity is one of the popular examples of play-to-earn games which offer the facility of monetary rewards in returns for NFTs.

The importance of web3 gaming in crypto also gains momentum prominently on the basis of offering fair virtual markets. Web3 games can offer complete access and full ownership over in-game digital assets to players. The games enable the storage of in-game digital assets in the form of NFTs alongside the support of interoperability. Modern blockchain networks such as Solana and Polkadot offer the advantages of interoperability by leveraging cross-chain communication bridges.

The next important highlight before a web3 games list in this discussion would be an obvious focus on some of the key features associated with web3 gaming. With the new gaming model in web3 games, players can have better privileges in ownership, control, and flexibility for trading in-game assets and collectibles. Here are some of the basic traits which you can find in modern web3 games.

The top players in web3 gaming showcase how the new gaming ecosystem thrives on experiences tailored to the preferences of players. You can discover many notable aspects through which web3 games have been focused on offering the best rewards to players. For example, the play-to-earn games show how players can make the most of games to earn monetary rewards. In addition, the self-sovereignty aspect in web3 games also emphasizes how they think of benefits for players.

One of the most striking highlights about ‘what is web3 gaming’ refers to the distributed nature of the process. You don’t have a single point of failure like the centralized servers of conventional games. On top of it, blockchain-based games use voting consensus for changes in the gaming process.

As a result, web3 games can provide better transparency. Furthermore, the autonomous operations of the web3 gaming ecosystem with minimal interventions of central authority ensure high availability. You also have the advantage of highly resilient data storage facilities and block minting for reduced downtime and better scalability.

The technology required for creating web3 games is also one of the top highlights of web3 gaming in crypto forums. You can notice the following important technologies in the stack for web3 games. 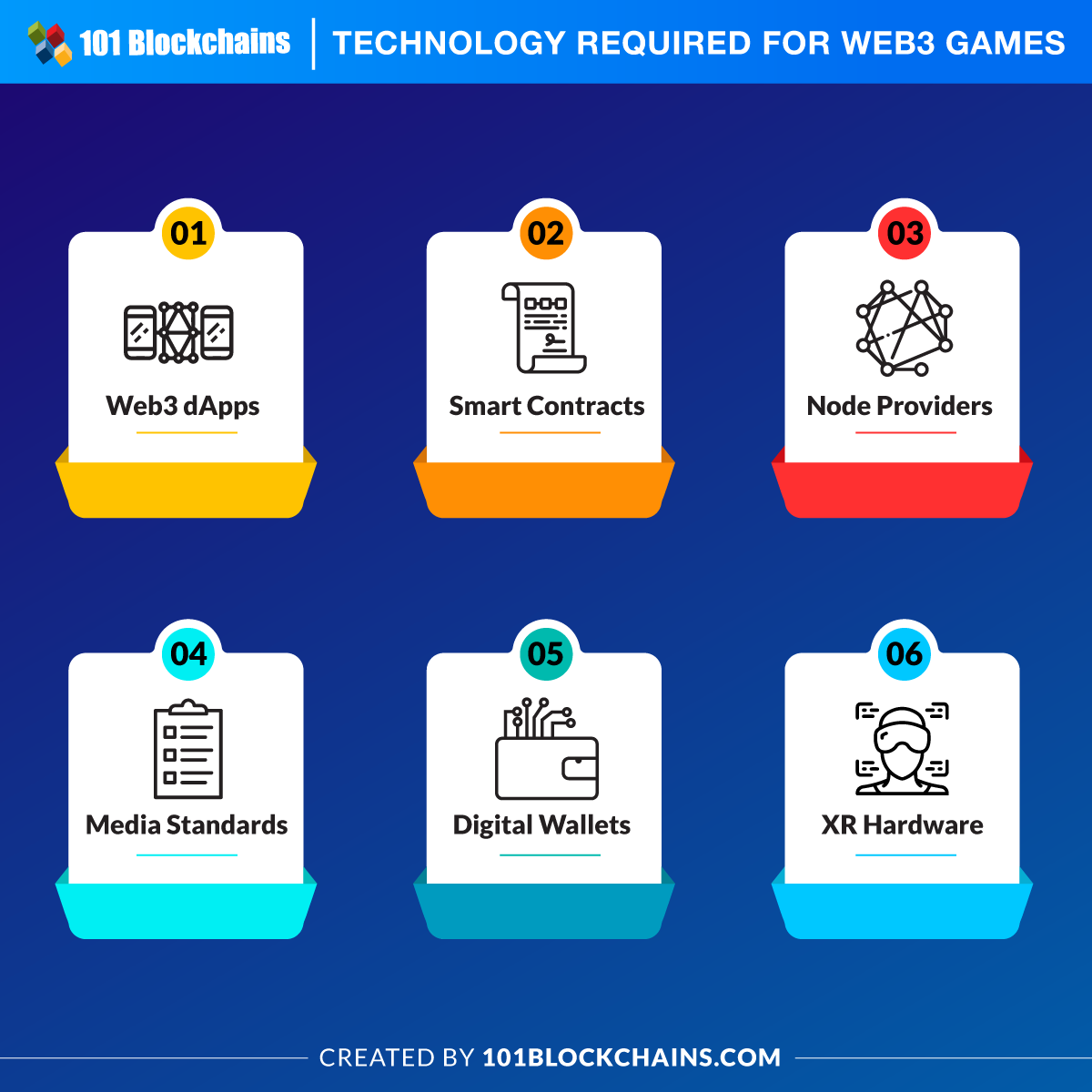 The first entry among components in the top web3 games would point at the web3 dApps. Web3 libraries help game developers and players interact with blockchain networks. The web3 dApps or libraries offer the necessary tools for supporting in-game assets and transactions.

Smart contracts are the heart and soul of web3 games you see today. They help in defining the rules for voting and decision-making regarding the changes required in the evolution of the game. Generally, developers use Remix IDE in web3 gaming projects for writing, compiling, and deploying smart contracts. On the other hand, you have the advantage of tools such as Hardhat, Brownie, and Truffle for simple local development environments.

If you are new to smart contracts, you might not be sure of its capability. Check the detailed  guide Now on Smart Contract Use Cases

Node providers also referred to as web3 providers, are another significant highlight in discussions on blockchain games and their value. Web3 providers help in extracting the gaming information on the blockchain network, where nodes serve as an integral element in the web3 developer technology stack. Most important of all, the web3 libraries or dApps cannot interact with smart contracts without nodes.

Another prominent aspect in the evolution of web3 gaming in crypto ecosystem is the need for open media standards. Web3 games need open and interoperable standards for media design as they deal with texts, audio, video, 3D scenes, and many other vectors for powering dApps.

Participation in the top web3 games would obviously require integration with blockchain-based wallets. The web3 games must feature blockchain-based digital wallets with unique wallet addresses providing identification. Most important of all, it serves as a repository for different in-game assets and collectibles.

The final highlight in the tech stack for web3 gaming would draw the limelight towards hardware for extended reality. XR hardware such as haptic gloves, smart glasses, and scanning sensors can help in enhancing the web3-based gaming experiences. As a matter of fact, XR hardware can serve as an integral aspect for linking up web3 games with the broader web3 ecosystem, such as the metaverse.

The final answer regarding “What is Web3 gaming” definitely offers a plausible impression of how they can revolutionize the world of gaming. Web3 games allow the ownership of in-game assets and collectibles to the players without any central intermediaries or managers. In addition, the play-to-earn games in a web3 games list also showcase how web3 can change the world of gaming forever.

Now, players won’t have to pay for playing games anymore if you think of the prospects for monetary rewards with blockchain-based games. With a wide range of benefits for players and a broadly innovative technology stack, web3 games have shown promising potential for growth. Learn more about web3 games and their benefits.

Join our annual/monthly membership program and get unlimited access to 25+ professional courses and 55+ on-demand webinars.

New Ethereum Token Standard Might Allow Creation of Yield-Bearing Tokens: What is EIP-4626?